Snowed in and called out, what a perfect night for carvin' some pun'kins! Plus Halloween is like day after tomorrow... so...

WARNING: Graphic & horrifyingly realistic depictions of pumpkin innards. Not for the squeamish or pumpkin-huggers.

Now we just have to get some punk kids to come eat this bucket of candy.
Posted by Travis at 7:51 AM No comments:
Labels: Halloween, jack-o-lantern

Look what we woke to!

This is how we felt!

And then we did this!

And then we saw these!!!

And we filled this. 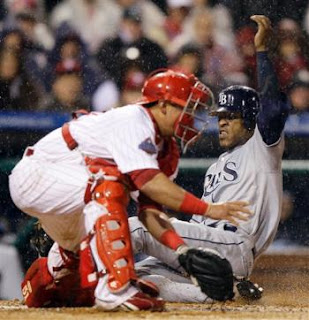 I was worried. Regardless that the Phillies have dominated this World Series, I'd at least like to see a full game played, especially if it's the deciding game of the season. So, luckily, thru all the rain and wind and fly ball error the Rays managed to tie the game just as the umps decided to make the only good call of the night and postpone the game, which then became suspended. If Upton had not stolen that base, despite Hamels 5 throws over to hold him at first, and scored on the single by Pena tying the game the World Series would have ended in the 6 th inning. I think a lot of people would have been upset over that.

But not the case. So let's hope the sun shines enough today for a few innings.
Posted by Travis at 5:27 AM No comments:
Labels: baseball, Phillies, world series 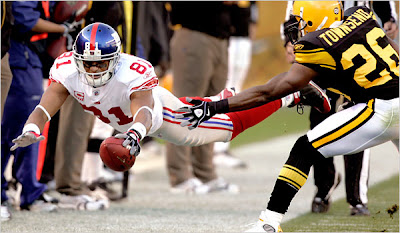 Relieved the Giants pulled it out last night. I can't stand the Steelers and that Roethlisberger ever since they phonied their way into a Super Bowl ring. And there was plenty of acting last night too, and the refs were eating it up. I cannot stand this new "defenseless receiver" penalty. Does that mean I can run 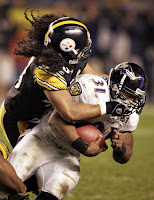 down the field backwards, or with my eyes shut, and no one can hit me? This is football. Wimps. They were just giving the Steelers 15 yard all game. Maybe it was those nances with the long hair. Haha the NFL should make a rule about that. Cut it off Ms. Polamalu and before this turns into a pillowfight.

Either way, the Giants won.

Sidenote: ya ever notice that all of Pittsburghs professional sports teams are black & gold? Even their CBA team The Pittsburgh Xplosion. Black & Gold. How can this be?
Posted by Travis at 10:50 AM No comments:
Labels: dislike, football, Giants, NFL 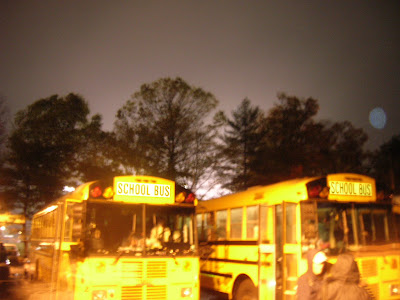 I whine about my job. I find the people I'm asked to interact with have little to no ability to carry any sort of cerebral conversation, the travel sucks (last night I drove 5 hours for a 11 minute performance and got rained on: hard), and then there's this competitive nature that I just can't seemed be interested in entertaining for some reason or another. (I'm guessing this is the way most people feel about their jobs). 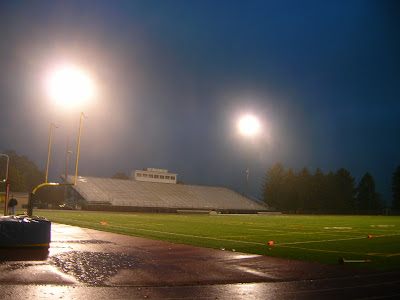 But then you have a night like last night that despite the quite literally torrential downpour & the bloodied children, was a very nice night. Being involved in this activity for so many years, I have made the handful of what I could classify, albeit loosely, as good (dare I say best) friends. These people usually end up living across the country or in places that I'm just not willing to venture, and such is the case with last night and meeting up with Rick.

History Lesson
Rick Subel & I met on a fateful day back in the winter of 1998. I don't remember much about the evening, other than quickly receiving the nickname of "Cowboy" (I truly don't recall the reasoning) and sleeping on the floor of an apartment that to this day I don't know the tenant of. From there the relationship flourished to becoming fellow performers, roommates, composers, co-workers, lunch dates, and brothers. And as is the nature of this activity & its inhabitants, when opportunity knocks we usually don't hesitate to answer, even if the knocking is coming from like, Texas. So, long long story short, Rick moved to Georgia, I happened to land a gig there the following season and thought "Hey, what a coincidence!" and then after a year in the dirty south Rick landed another, better paying gig in Texas, only to return to Georgia after a year or so of the yee-hawing lifestyle. We gave it another go, but it was evident Ricks newly chosen involvement was more than the relationship could withstand. So we broke up.

Now I see him here and there, when stars align and bring our groups into the same hemisphere. Last night was one of those nights. 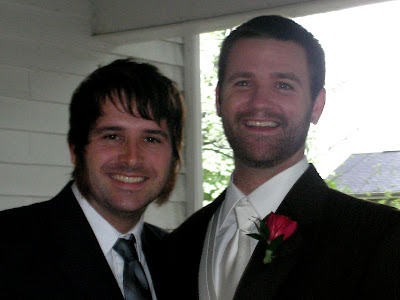 Rick & I at my wedding
It was merely a brief 20 minutes in a brightly lit auditorium, and the conversation was all too often interrupted by the annoyingly self-proclaimed "loudest giggler in the world" (who was also a 45 year old man who was supposed to be working) but it was nice to sorta catch up and hear what he's been up to and what he's planning to be up to. As usual, he's got things in the works. We talked guard & music & living arrangements & waxed poetic of days of yore. It was nice and put me in a better mood, considering the rest of the night was a complete wash. A nice, quick reunion. Maybe that is enough. A brief encounter every 9 months or so. He's invited us out to the city tonight for dinner & some drinks before he and his girl Andria have to fly back south. I don't think we'll go.
Posted by Travis at 11:08 AM No comments:
Labels: rain, Rick Subel, Roxbury 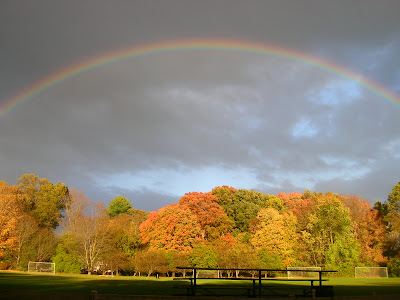 I took this on my way into the Roxbury parking lot on Tuesday, same place I had my encounter with an 8 point buck. This must be a magical field.
Posted by Travis at 8:08 AM No comments:
Labels: rainbow

I have a new favorite website. It's called "Painter of Pancakes" and features the oil paintings of Dan Lacey, whose approach is really quite simple. Dan takes an image of interest, be it political, humorous, a figure in the entertainment industry, what-have-you, and draws them... with a pancake on their head. Brilliant!

Here are some of my favorites.

Barack Obama in a moment of pancake reflection 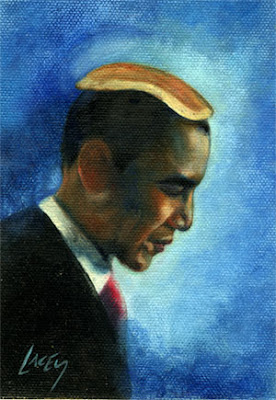 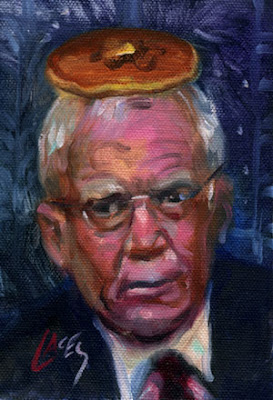 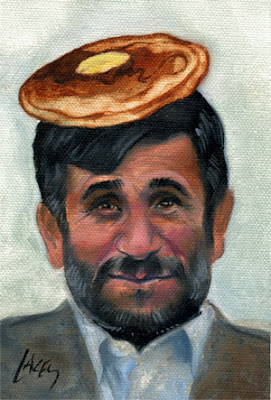 Oprah Winfrey doing her now infamous "Has anyone seen my pancake?" bit 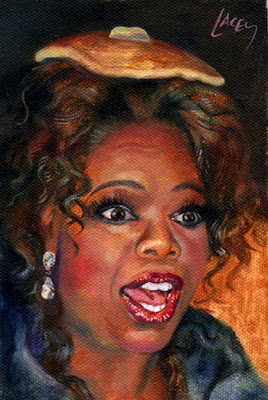 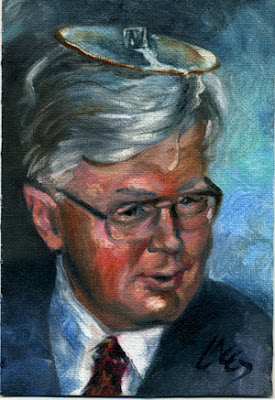 Sarah Palin gets the triple-stack treatment 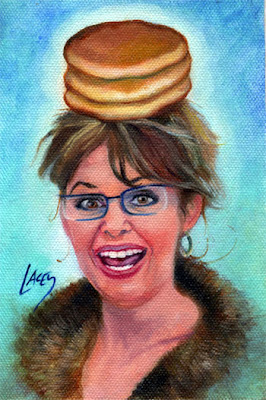 Vladimir Putin eats a pancake off a tranquilized tiger 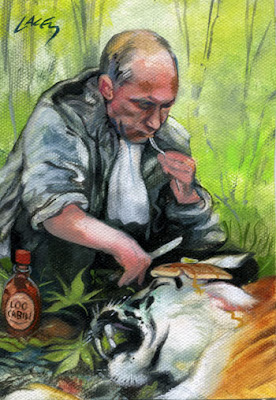 Lacey also does some non-human subjects:

here is an angry bunny with a pancake on its head 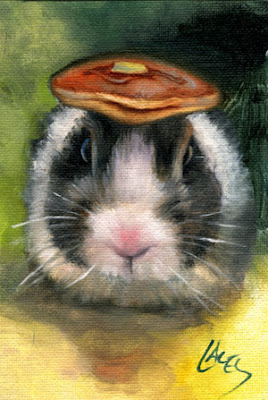 how about an IBM server with a pancake on its head? 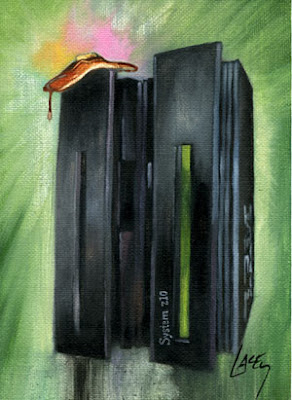 if you keep up with the blog you know my affinity towards this hadron collider, maker of dark matter and potential destroyer of all humanity... with a pancake on its head 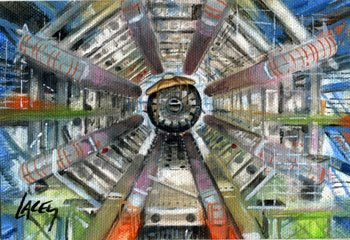 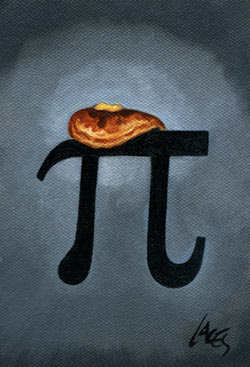 Pass the syrup!
Posted by Travis at 4:41 AM No comments:
Labels: art, funny, painting, pancakes

We head eastward for our second day of outdoor excursion. Eastward to the "Niagara of Pennsylvania", a state that apparently doesn't take itself too seriously. Bushkill Falls is a lovely place, 6 or 7 quaint yet beautiful falls throughout, but trust me, ain't no one trying to go over these in a barrel.

Our estimated time of arrival was set for opening hour, 9 am. Our actual time of arrival: 1:30. Early birds are for suckers. Fran had to return some moccasins purchased on a pass-by a week earlier and then we checked out the Native American exhibit.

I could totally live in a longhouse.

They also had an old sifter from the mining days. I took a picture of that.

We hurried on to the falls. Lots of trails and we wanted to see them all. We're training for a big hike. Seeing the Main Falls first is kind of unavoidable since they're right there when you come down the first trail. Lots of great vantage points spiraling thru steep staircases and winding paths. Very cool. I would build a longhouse here.

We headed down the river to check the Lower Gorge Falls, crossed some bridges, some bridges with strangely low weight restrictions for their size, and climbed a few rock formations. The paths were getting more rugged.

The next part of the trail was for hikers only, and that is us. I mean we had our new hiking shoes on and even had backpacks with water bottle pockets and carabiners attached. We were hikers. We stuck close to the river as to not get lost, and climbed ourselves thru the rocky terrain while we ate blowpops.

We were happy to see the man-made trail reappear, and knew we were close to the duet of Bridal Veils & Bridesmaids Falls. These were small but aesthetically pleasing sights nestled into the corners of rock formations. We liked them. We scouted places to build a longhouse.

We came to a fork called Peter's Corner. We could go south back to base camp or head east thru Pine Grove Forest and see some more falls. We chose more falls. And apparently were the only ones who did because we didn't see a soul between there and Pennel Falls. A good size falls, more flat ripples than straight drop, that flows just below a footbridge. Nice.

A tight path wove between two tall mountains and a running stream created quite a nice shady hike before we entered the heart of Pine Grove, where pine trees grew far as the eye could see, hence the name...

We arrived at the Upper Canyon, home to my favorite of the day, Laurel Glen falls. A system of bridges and walkways along the sides of the mountains make for a nice finale to these wonderous works of nature. Water flowed quickly towards the Main Falls from here and we stopped to take more than photos.

We were back at the beginning, but one more climb up the center of the falls would bring us to the Delaware Valley lookout, so how could we resist.

From atop the mountain we ate lunch and made another trip around thru Pennell Falls, thru the Pine Grove and across Laurel Glen. Another good day. We're 2 for 2.