Ok folks, this is a real treat for you today. A group of inmates from a prison in the Philippines, looks to be around 1,000 or so, got together and decided to perform Michael Jackson's "Thriller", and I wouldn't hesitate to say that it's pretty dead on.

Check out the chick in this. And the guy playing Michael, boy! he's got some moves. The last 30 seconds or so get a little creepy, but it's still worth a gander.


I wonder how long it will tak now for the broadcasting companies & TV producers to jump on this. How long til we see "Season ??? of So You Think You Can Dance: Live From Behind the Bars!" or "Foreign Criminals Got Talent"?
Posted by Travis at 12:01 PM No comments:
Labels: dancing, funny, music, prison, video

Today we fulfilled our dream of visiting an ice cream plant.

Unfortunately they weren't down with letting us ride the conveyers and have ice cream squirted directly down our throats, but we did get to grab quarts fresh off the assembly line, 10 seconds after they were packaged, and I must say, it was stunningly delicious. Even a non-favorite, such as butter pecan and strawberry yogurt satisfied the taste buds beyond expectations.
Doubley unfortunate was the fact that we weren't allowed to take photos inside the plant. Apparently the secrets held within are that of utmost confidentiality and we were sworn to secrecy upon our arrival. But we did manage to snap a few shots outside in the hall in our freezer getups.

It was -20 up in there people. Serious frozen boogers.
Posted by Travis at 5:09 PM No comments:
Labels: ice cream, Indiana, safety, visiting

We're packing. Scratch that. I'm packed. She's been packing since Tuesday. We're going to Indiana with the folks for the weekend to visit the elder siblings Brad & Erin & their boys Braden (4) & Dylan (9 months). It promises to be an adventure, complete with pontoons, ice cream plants & the like.

So I thought I'd take this moment to kinda catch up with what we've done the past few weeks, as it has been full of it's own adventures, treasure hunts, & rainbows [literally].

I went on tour. Look at me go

We had giant ice cream cones with Mike in NY. We each had two

A barge was on fire in Rhode Island

Eric Brust picked us up that night and we spent the next day with him, first just driving around Boston...

...and then we rented kayaks and took to the Charles River

We came upon a remote island and discovered a hidden treehouse, in which we decided to stay & start our own civilization

We tamed the river. KayaKINGS!!!!!

We topped that day off the only way we know how; with some of the best Indian food in New England...

We returned home, rather exhausted, to the basement in Georgia just in time for Madison's 3rd birthday party

For fun we took Madison to the Atlanta Botanical Gardens

And then some ice cream (a reoccurring theme)

That pretty much brings us up to date. Click on the pictures to take you right to the photo albums for the full experience.

So the other night I got the urge to look at old photos, so I pulled out the old baby book and to my surprise ALL of my baby pictures were scatter, scrambled, and scrunched OH MY! I was quite shocked. So I pulled them all out, stacked them neatly, and decided to SCAN THEM ALL!
So for the past 3 days I have been scanning my baby pictures...it has been quite a project and rather time consuming, that's why I'm doing it at work :)
Here is sneak-peak at my previous years

So not only am I scanning my baby pictures...I am scanning all of the family pictures too! Who knows when this "project" of mine will be done? Not me...but I do know I have 5 more shoe boxes of pictures I have to sort, scan, and label! Man....
Posted by Laura at 11:19 AM No comments:
Labels: childhood, Laura, old photos, project 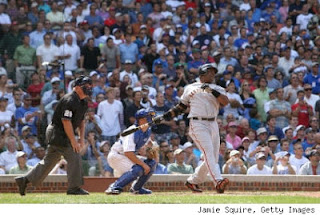 ...in one game! Guess all he needed was some good rest. Good for him. Sick of hearing all the negativity towards Barry. He's always been one of the best players, we knew he would break this record back in the 90's. And if people were really so disgusted they wouldn't be clamouring over these homerun balls in the street & in the stands with their camera phones armed at every Bonds at bat to capture the moment, and the MLB wouldn't be holding up the game to switch to those commemorative balls their using to mark the occasion. Good for you Barry Bonds! I can't wait for you to beat this record. I'll be cheering from my couch.
Posted by Travis at 10:04 AM 1 comment:
Labels: Barry Bonds, baseball, naysayers, record

Oh poor little blog, how we neglect thee. We have been home for and 2 weeks now and not a single word about our exhilarating afternoon in Boston with Eric, Fran’s first tour experience, or even our fabulous day hanging out with Madison, and nary a photo to view (and there have been photos). I must admit, I have been distracted. I have been burning CDs like you wouldn’t believe (over 200 in the past week) and I see no sign of it letting up anytime soon. I’m taking advantage of the time I was supposed to be away. That, and I watch ESPN all day, everyday, except for a little Seinfeld here and there. Oh! And my favorite (seriously, my favorite) show “Alone in the Wilderness” was on just the other day so of course that occupied my attention for an hour or so. Gotta buy that someday.


Ok, but I promise that sometime in the next few days you will get detailed writings and gorgeous photos of all that we have been up to, because we have been up to.
Posted by Travis at 11:03 AM 1 comment:
Labels: awesome, video

Oh! And there was amputation involved too, mmhm.

Yeah don't worry about it.
(someone call the police)
Posted by Travis at 9:26 AM No comments:
Labels: creepy, dreams, Laura

Is that it? Is that the whole movie? I can't imagine them making a whole 90 minute feature film out of this concept. And I really don't think that when I talk about The Swimmer, I talk about myself.

This dude wears nothing but a speedo the whole movie! Even on the highway!! Even when he races horses!!!! And those ladies, I don't like they're attitude.

So we're back in town, gathering ourselves and our dirty laundry. We did much, saw much & ate more. Details are coming soon, when I can collect my thoughts and photos.

But I can't post without some sort of substance so I will give you this:

Anyone who knows me knows I'm a Smashing Pumpkins fan. The only way my mother could get me to do my homework was by holding my Siamese Dream hostage (still the best album ever). Anyhow, they broke up in 2000 (sad), only to reunite, (seems like everyone's doing it these days) last year and record a new album, which comes out on Tuesday. Obviously since 2000 my musical tastes have expanded greatly, but there's always room for a good Pumpkins tune.

One of the big questions after the announcement of the reunion was "Who are the lucky souls in the new lineup?" The first video from the new album Zeitgeist answers that question.